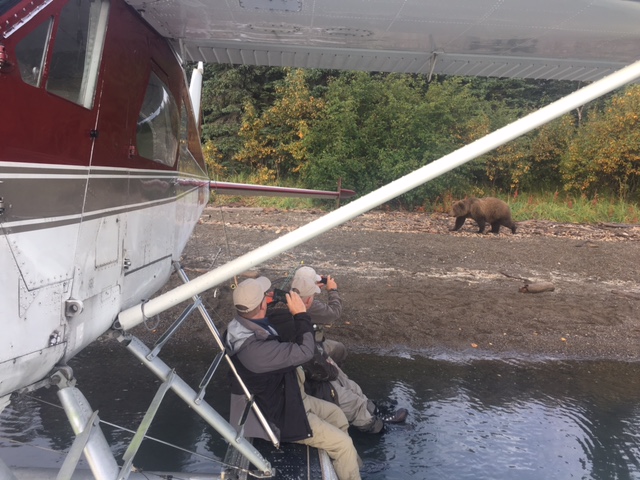 This week we have Richard Grosser and his son Eric as our guest at the lodge.

Richard is a repeat guest and his 4th time as our guest. His first Alaska wilderness trip with me was 28 years ago. Now at 88 Richard is still very active and sharp as a tack. Yesterday he and his son fished our home water the Newhalen. They had good fishing and got one very large rainbow.

Today we have flown by floatplane to Brooks falls. Fishing and seeing Grizzlies is the plan for the day. The fall colors are spectacular flying over the tundra with deeply blue lakes the red, green, brown and yellow’s in the tundra is so very different than it was only 10 days ago.

As we were getting out of the plane a grizzly strolled past the plane 40 feet from us. The photo was taken on my cell phone and gives a good perspective on how comfortable these bears are with us. The bear gave us only one glance and never even broke stride as she walked past us.

Lots of bears at Brooks today. Both at the falls and along the beach.

We ate lunch at Brooks then flew to another location in Katmai and landed where a small creek flows into a lake.

A few bears fishing in the creek.

Richard and Eric fished for char and got a few nice ones.

A sub adult walked between me and the float plane while I was napping on the beach. Her claws clicking on the beach rocks is what woke me up. She was 40 feet from me when I opened my eyes.

I just said hello girl!!  she stopped and turned around and walked around me.